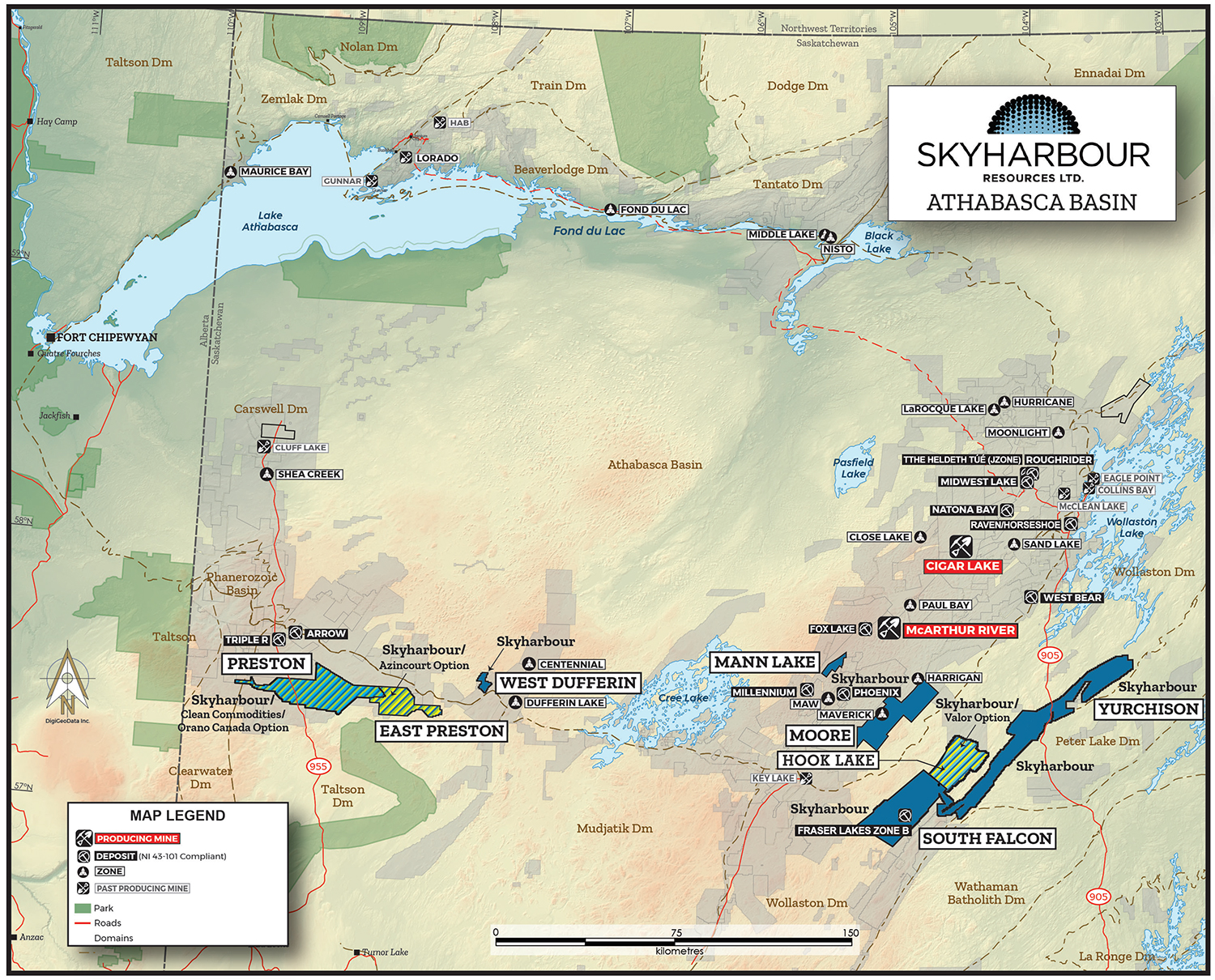 The 100% owned Yurchison Project consists of 11 claims totalling 54,184 ha in the Wollaston Domain of northern Saskatchewan, Canada. This contiguous set of claims covers an extensive package of Wollaston Supergroup metasediments in an area known for its base metal potential. The northeastern half of the project falls within the Courtenay Lake-Cairns Lake fold belt, which contains numerous Pb-Zn-Ag showings while the remainder is along trend to the north-northeast of the Janice Lake Cu deposit and numerous other base metal showings in the “Wollaston Copperbelt”.  Access to the area is enhanced by Highway 905 which transects the property near Courtney Lake. A planned all-weather road between Highway 905 and the communities of Wollaston Lake and Hatchet Lake is proposed adjacent to the northeastern section of the claims. It is unknown when the project will be completed, but once in place it will significantly improve logistics for the project. Grid power is used to service a motel, restaurant and gas bar is located at km 147 of Highway 905, a few km north of Courtenay Lake.

Rio Tinto has entered into $30 million, seven year, option agreement with Forum Energy Metals Corp. to acquire an 80 per cent stake in their Janice Lake property which is on strike to the southwest of Yurchison.

There is a significant amount of historical work on the property and surrounding areas, mainly focused on the eastern claims, including 23 underground surveys (diamond drilling, sampling and relogging of historical holes, and Wacker drill overburden till sampling) and various prospecting and geophysical programs. Some areas of the property such as the George Lake Zone have seen more extensive drilling, but in most areas, drilling has been limited with little or no follow-up. The majority of the work on this property was completed prior to 2000, with only a nominal amount (25 drill holes, 4 ground geophysical surveys, 4 airborne surveys) completed in the last 20 years. Previous showings/deposits in the area include several Pb-Zn, U, Mo, and/or Cu occurrences, for which there are more than 60 records in the Saskatchewan Mineral Deposits Index, the most significant of which include the George Lake Zn-Pb deposit (adjacent to the Skyharbour claims, SMDI 0663), and the Joannie Showing, just south of the Compulsion River. The most recent drilling in the Yurchison Project area was completed in 2008 by Golden Arch Resources/101083503 Saskatchewan Ltd. In the Wakefield and Brakewell Lakes area, and by JNR Resources Inc. in the Courtenay / Yurchison Lake area. The 2008 drilling by Golden Arch Resources / 101083503 Saskatchewan Ltd. confirmed the presence of zinc and lead mineralization at the George Lake Zinc zone and correlated well with Falconbridge’s previous drilling results. Additionally, there is a small volcanic-hosted copper showing near Courtenay Lake

Recommendations for future work include a reassessment of historical till geochemistry and relogging of available historical drill core to better understand the stratigraphy and its relationship to the sulphide mineralization and the mineralizing systems. Modern geophysical techniques should also be employed in order to look for signatures related to known mineralization. This work should be followed up by systematic geological mapping, geochemical sampling and prospecting program. A systematic diamond drilling program should be undertaken on priority targets on the property.

Richard Kusmirski, P.Geo, M.Sc., geologist for Skyharbour is the Qualified Person as defined by National Instrument 43-101 and has approved the technical information on this website.