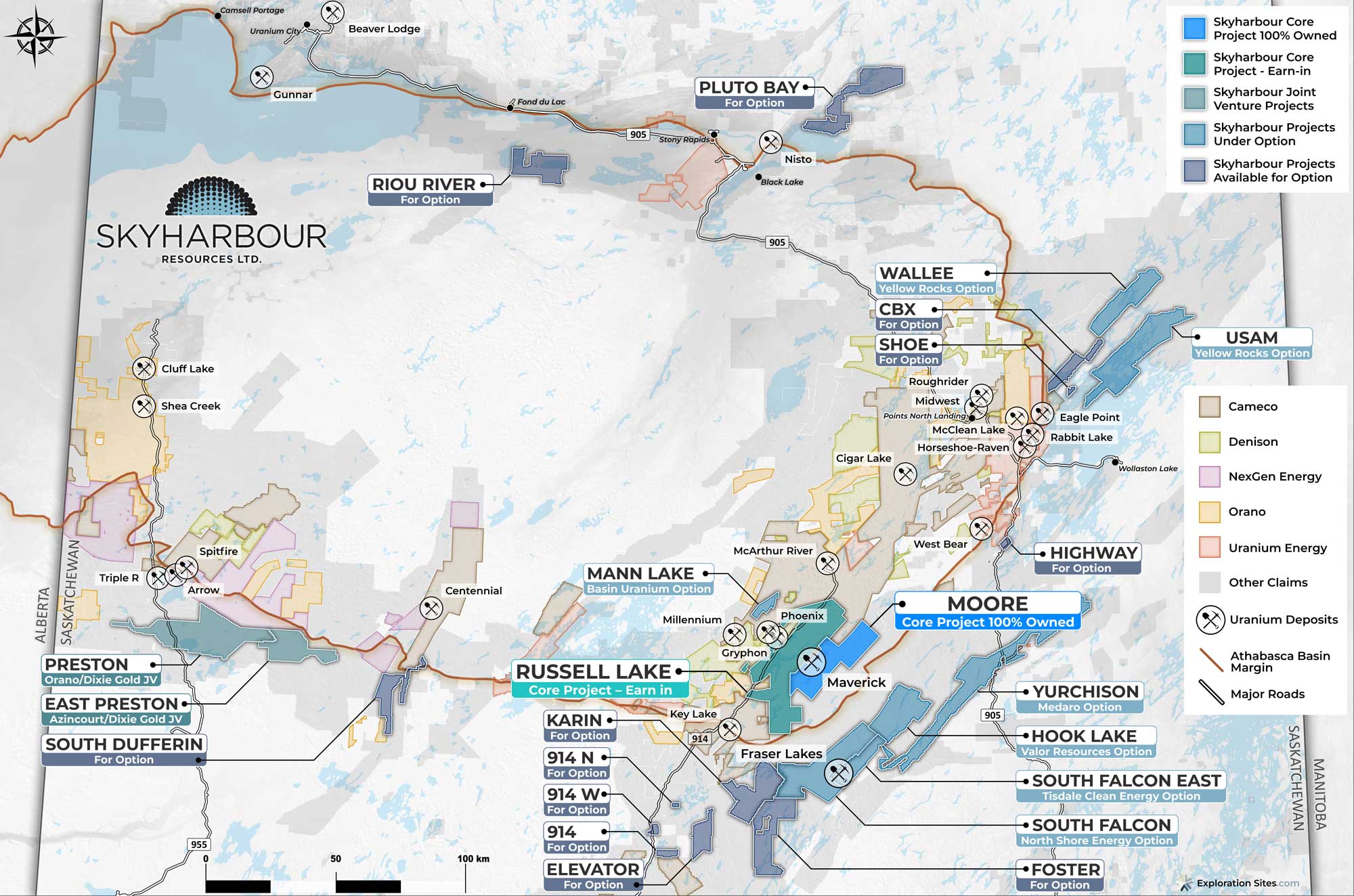 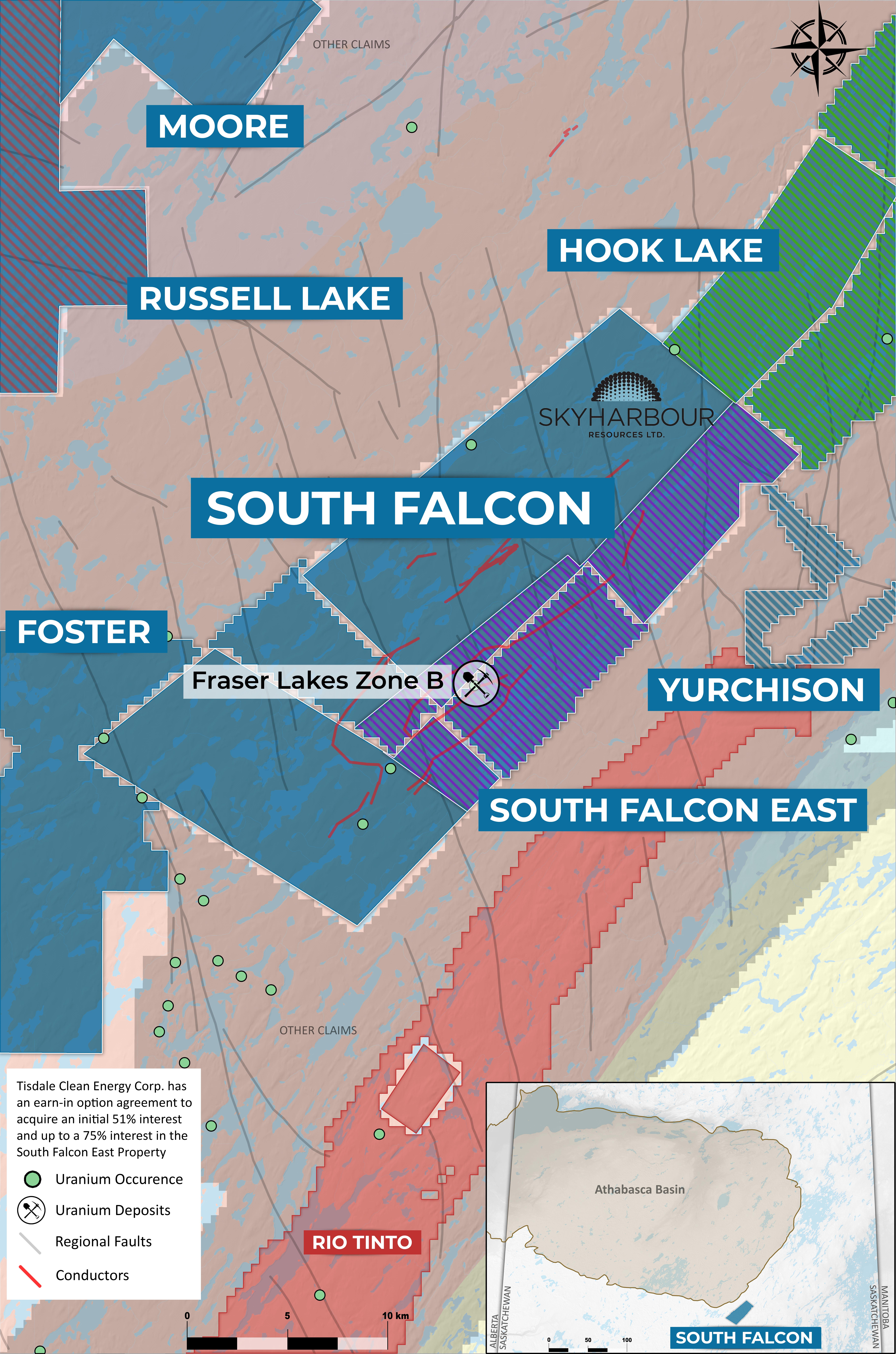 The South Falcon East Project is a uranium project in the southeast Athabasca Basin and represents a portion of Skyharbour’s larger South Falcon Project. The project covers approximately 12,464 hectares and lies 18 kilometers outside the Athabasca Basin, approximately 55 kilometers east of the Key Lake Mine. Drilling to date on the entire Falcon Point Project area totals over 22,000 metres in more than 110 holes. Over $15 million has been invested in exploration consisting of airborne and ground geophysics, multi-phased diamond drill campaigns, detailed geochemical sampling and surveys, and ground-based prospecting culminating in an extensive geological database for the project area. The project area is in close proximity to two all-weather northern highways and grid power.

Historical exploration at the South Falcon East Project identified an area of U-Th-REE mineralization at the Fraser Lakes Zone B over an area comprising 1.5 km by 0.5 km along an antiformal fold nose cut by an east-west dextral ductile-brittle cross-structure adjacent to a 65 km long EM conductor. The near-surface Fraser Lakes Zone B deposit consists of a current NI 43-101 inferred resource totaling 7.0 million pounds of U3O8 at 0.03% and 5.3 million pounds of ThO2 at 0.023% within 10,354,926 tonnes using a cut-off grade of 0.01% U3O8. The independent NI 43-101 technical report by GeoVector Management Inc. supporting this mineral resource estimate was filed on SEDAR on March 20, 2015, by Skyharbour. Independent qualified person, Dr. Allan Armitage, P.Geo., is responsible for the contents of the technical report and comments related to the resource estimate and its parameters.

Discovered in 2008, Zone B is located within the broader 6-kilometre by 7-kilometre Fraser Lakes target area where multiple mineralized zones have been discovered along a 65-kilometre-long, folded EM conductor system comprised of Wollaston Group graphitic pelitic gneisses and uraniferous granitic pegmatites. Diamond drilling consisting of 25 holes totaling 4,603 metres has defined a zone of moderately dipping, multiple-stacked uranium and thorium mineralized horizons down to 175 metres that is open to the southwest and east-northeast as well as at depth. Uranium and thorium mineralization is accompanied by highly anomalous concentrations of base metals, rare earth elements and other pathfinder elements. The style of uranium mineralization associated with intrusive rocks is commonly referred to as “Rössing type” mineralization named after the largest, longest-running open pit uranium mine in the world, the Rössing Mine operated by Rio Tinto in Namibia. 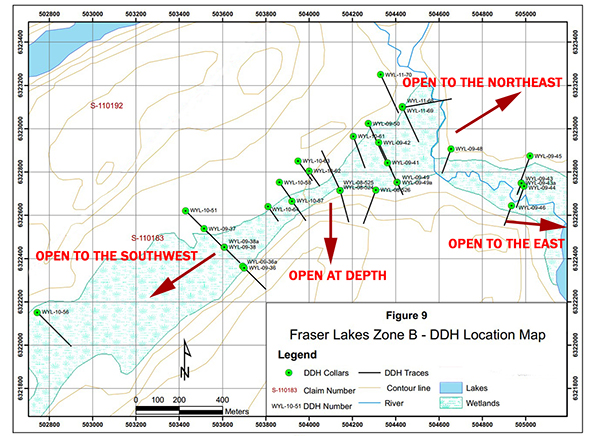 JNR Resources Inc., a company acquired by Denison in 2013, announced an initial mineral resource estimate in 2012 (Refiled in March of 2015 by Skyharbour Resources) for the Fraser Lakes Zone B of 6,960,681 pounds U3O8 inferred at an average grade of 0.03% U3O8 and 5,339,219 pounds ThO2 inferred at an average grade of 0.023% ThO2 within 10,354,926 tonnes using a cutoff grade of 0.01% U3O8. The independent NI 43-101 technical report supporting this mineral resource estimate was filed on SEDAR on September 26, 2012 by JNR Resources. Independent qualified persons, Dr. Allan Armitage, P.Geo., and Alan Sexton, M.Sc., P.Geo., of GeoVector Management Inc., are responsible for the contents of the technical report and comments related to the resource estimate and its parameters.

The exploration potential of the Fraser Lakes target area is considered exceptional, including the resource expansion potential of the current deposit at Zone B. Geological and geochemical features show distinct similarities to high-grade, basement-hosted deposits in the Athabasca Basin such as Eagle Point, Millennium, P-Patch and Roughrider.

Mineral resources that are not mineral reserves do not have demonstrated economic viability.

In July 2015, Skyharbour reported diamond drill assay results from its Falcon Point uranium and thorium property. The drill program consisted of five diamond drill holes totaling 1,278 metres with four of the five holes intersecting uranium and thorium mineralization. Drill hole FP-15-05 intersected a 14.0 metre wide mineralized zone starting at 134.5 metres down-hole depth consisting of the highest grade mineralization found to date in the deposit area. These intersections include 0.172% U3O8 and 0.112% ThO2 over 2.5 metres as well as 0.165% U3O8 and 0.112% ThO2 over 2.0 metres within a broader interval containing 0.103% U3O8 and 0.062% ThO2 over 6.0 metres. This fifth and last hole of the program was lost in the mineralized horizon due to technical issues with the drill rig.

The drill program tested high-priority targets in and around the current uranium and thorium resource at the JNR Fraser Lakes Zone B deposit. It was successful in discovering additional mineralization at higher grades than the deposit average and was the Company's first work program at Falcon Point since acquiring the property from Denison Mines in the summer of 2014.

A focused exploration program is recommended for the South Falcon East property. The primary objective is to define additional resources at the Fraser Lakes Zone B by establishing the potential for extension of the mineralized zone to the east and west of the currently defined deposit. In addition, further interpretation of geochemical and assay data in conjunction with geological and structural analysis will improve the effectiveness of targeting for future drill programs. Skyharbour completed an airborne gravity geophysical survey on the property to cover the entirety of the South Falcon Point Property at a vertical height of 80 m and a line spacing of 200 m for a total of 2,843 line km. The survey has further refined drill targets for future programs.

After acquiring a 51% interest, Tisdale may increase its interest in the Property to 75% by:

No common shares will be issuable to Skyharbour at a deemed price of less than $0.05 or such minimum price as is permitted by the Exchange at the date of issuance, nor will they be issued to Skyharbour to the extent such issuance would result in the Company becoming a new insider of Tisdale.

Assuming Tisdale exercises any portion of the option and acquires an interest in Property, the parties intend to form a joint venture for the ongoing development of the Property. A small portion of the Property is subject to an existing 2% net smelter returns royalty owing to a former owner, and Tisdale has agreed to grant a further 2% royalty to Skyharbour. One-half of the royalty, being 1%, to be granted to Skyharbour can be purchased at any time by completing a one-time cash payment of $1,000,000.

Tisdale has now satisfied the outstanding conditions to completion of the transactions contemplated by the Option Agreement and has completed an initial cash payment of $350,000 and issued 1,111,111 common shares to Skyharbour. The common shares issued to Skyharbour are subject to restrictions on resale in accordance with applicable securities laws, and the policies of the Exchange, until May 24, 2023.