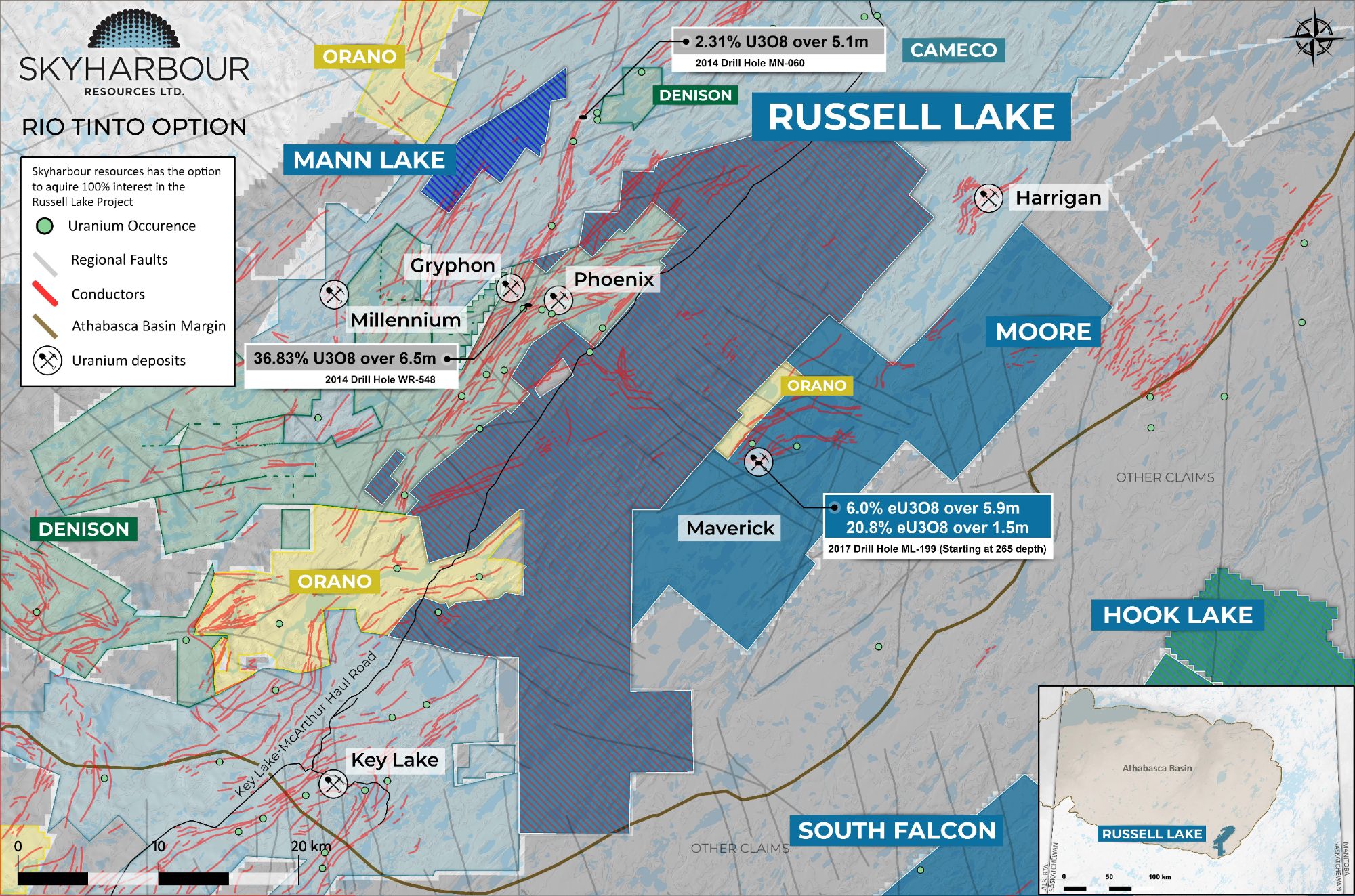 The Russell Lake Project is a large, advanced-stage uranium exploration property totalling 73,294 hectares strategically located between Cameco’s Key Lake and McArthur River Projects and adjoining Denison’s Wheeler River Project to the west and Skyharbour’s Moore Uranium Project to the east. Highway 914, which services the McArthur River mine, runs through the western extent of the Property and greatly enhances accessibility. Similarly, a high-voltage powerline situated alongside Highway 914. Skyharbour’s acquisition of Russell Lake creates a large, nearly contiguous block of highly prospective uranium claims totalling 108,999 hectares between the Russell Lake and the Moore uranium projects.

There has been a meaningful amount of historical exploration carried out at Russell Lake, with most of it conducted prior to 2010. The Property has been the subject of over 95,000 metres of drilling in over 230 drill holes. The Property’s claims are in good standing for 2-22 years with assessment credits built-up from previous programs.

Several notable exploration targets exist on the property including the Grayling Zone, the M-Zone Extension target, the Little Man Lake target, the Christie Lake target, and the Fox Lake Trail target. More than 35 kilometres of largely untested prospective conductors in areas of low magnetic intensity exist on the Property as well.

At the Grayling Zone, drilling of the 2,200 metres long, up to 100 metres thick sub-parallel Grayling conductor intersected an 800 metres long discontinuous zone of basement-hosted uranium mineralization with localized perched and unconformity-hosted associated mineralization along a graphitic thrust fault. Drill hole RL-85-07 intersected 3.45% U3O8 over 0.3 metres at a depth of 363.2 metres and 0.1% U3O8 over 0.5m at a depth of 366.4 metres. This target is prospective for additional high-grade uranium discoveries and is open in several directions.

At the M-Zone Extension target, historical drilling at neighbouring Denison’s M-Zone along trend from the Grayling Zone intersected basement hosted uranium of 0.70% U3O8­ over 5.8 metres at a depth of 374.0 metres. Like the Grayling Zone, the mineralization is hosted by a graphitic thrust fault. The northeast extension of the M-Zone-Grayling corridor onto the Property has seen limited drilling, but mineralization was intersected in historical drilling, returning 0.7 metres of 0.123% U­3O8 at 619.1 metres depth in hole MZE-11-03.

The Little Man Lake Zone target is 500 metres long, 10 to 15 metres thick, 25 to 35 metres wide, and is a zone of prospective geology associated with an unconformity depression. The last drilling in this area was in 1989, prior to modern uranium exploration models, with historical uranium grades ranging from 0.03% up to 0.1% U3O8 at around 300 metres depth.

In addition to the aforementioned target areas, there are more than 35 kilometres of untested conductors on the Property underlain by rocks of low magnetic intensity, suggestive of prospective graphitic meta-pelitic basement rocks. The Project has seen limited exploration in the previous twelve years, so minimal modern exploration techniques and methods have been used to expand existing zones of mineralization as well as to make new discoveries.

There is a fully permitted exploration camp on the Project suitable for over forty people located on the highway and within 5 kilometres of Denison’s Phoenix deposit. Skyharbour is planning an initial phase of exploration and drilling at the Project with details forthcoming.

“We are very pleased to have reached an agreement with Rio Tinto to acquire up to a 100% interest in Russell Lake. This is a significant transaction for Skyharbour and involves the acquisition of a premier exploration property adjacent to our Moore project. Uranium properties with the pedigree and prospectivity of Russell Lake are few and far between given the very strategic location, notable historical exploration and findings, as well as the numerous property-wide targets with the potential to generate new discoveries.”

“Additionally, we welcome Rio Tinto as a new strategic shareholder and project partner.  We have a shared vision for the exploration of the various prospective target areas that remain to be fully tested on the Property using modern exploration methods and techniques. We look forward to working with Rio Tinto to generate a new meaningful discovery in the years to come.”

Skyharbour will conduct a first phase of drilling consisting of 3,000 metres to follow up on notable historic exploration and findings, as well as to test additional targets with the potential to generate new discoveries. This phase of drilling will test previously identified prospective target areas, some of which host high-grade uranium mineralization in historical drill holes. Of particular interest for this inaugural drilling program will be the Grayling Zone located nearby the exploration camp and road. This first phase of drilling will then be followed up with several other phases of drilling totalling 10,000 metres in 18 – 20 drill holes.

After extensive compilation and review of the relevant exploration data, special attention has been given to the structural setting of the geological, geochemical and geophysical data at the Grayling Zone for exploration purposes. Wide-spaced drilling at the Grayling Zone encountered an 800 m long discontinuous zone of uranium mineralization in a ~2,200 m section of thrust-faulted conductive basement rocks (i.e. graphitic pelitic gneisses) up to 100 m thick, which lie along the overall >10 km long Grayling-M-Zone conductor trend. Uranium mineralization identified to date includes basement-hosted, unconformity-hosted and perched varieties associated with the nose of a basement thrust wedge (SMDI 2151, 3563, 3564). The best historical drill hole at the Grayling Zone is hole RL-85-07, where a 0.3 m interval grading 3.45% U3O8 was intersected a depth of 363.2 metres, as well as an interval of 0.09% U3O8 over 0.5 m at a depth of 366.4 metres (SMDI 2151). Additional drillholes containing significant uranium mineralization related to the Grayling thrust fault are located along the >10 km long extension of the Grayling conductor trend, both on-property at the M-Zone Extension (SMDI 5540) and off-property at the M-Zone (SMDI 2139, 3569) on Denison Mines’ adjacent Wheeler River property, further highlighting the potential fertility of this major conductor trend.

Significant structural offsets with the potential to act as major traps for uranium mineralizing fluids have been identified at the Grayling Zone. Traps such as these are the setting for high-grade zones of uranium mineralization at Denison’s adjacent Wheeler River Project (Phoenix and Gryphon deposits) as well as Skyharbour’s adjacent Moore Uranium Project (Maverick and Maverick East Zones). The Company’s initial drill program at the Russell Lake project will be focusing on the large gaps between mineralized holes in order to further define the mineralization and controlling structures at the Grayling Zone, as well as testing the down-dip and down-plunge extensions of the Grayling thrust fault into the basement rocks which have seen limited historical drilling. Logistics for this initial drill program will be facilitated by the proximity of the Grayling Zone to the camp at McGowan Lake. 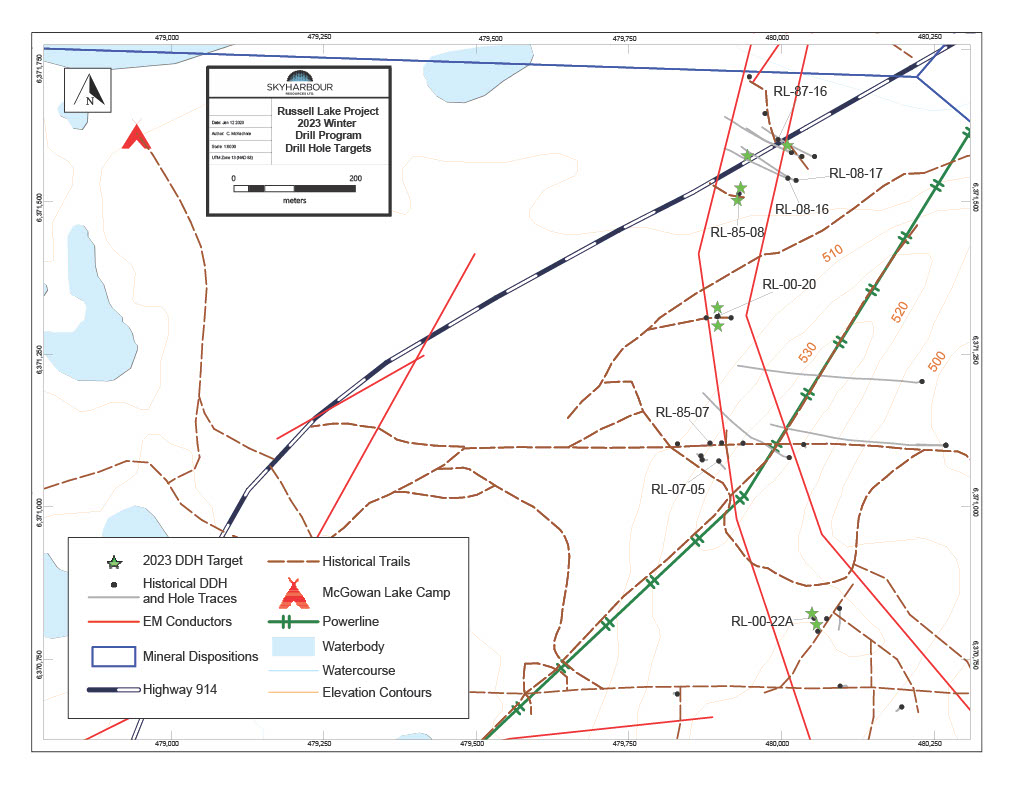