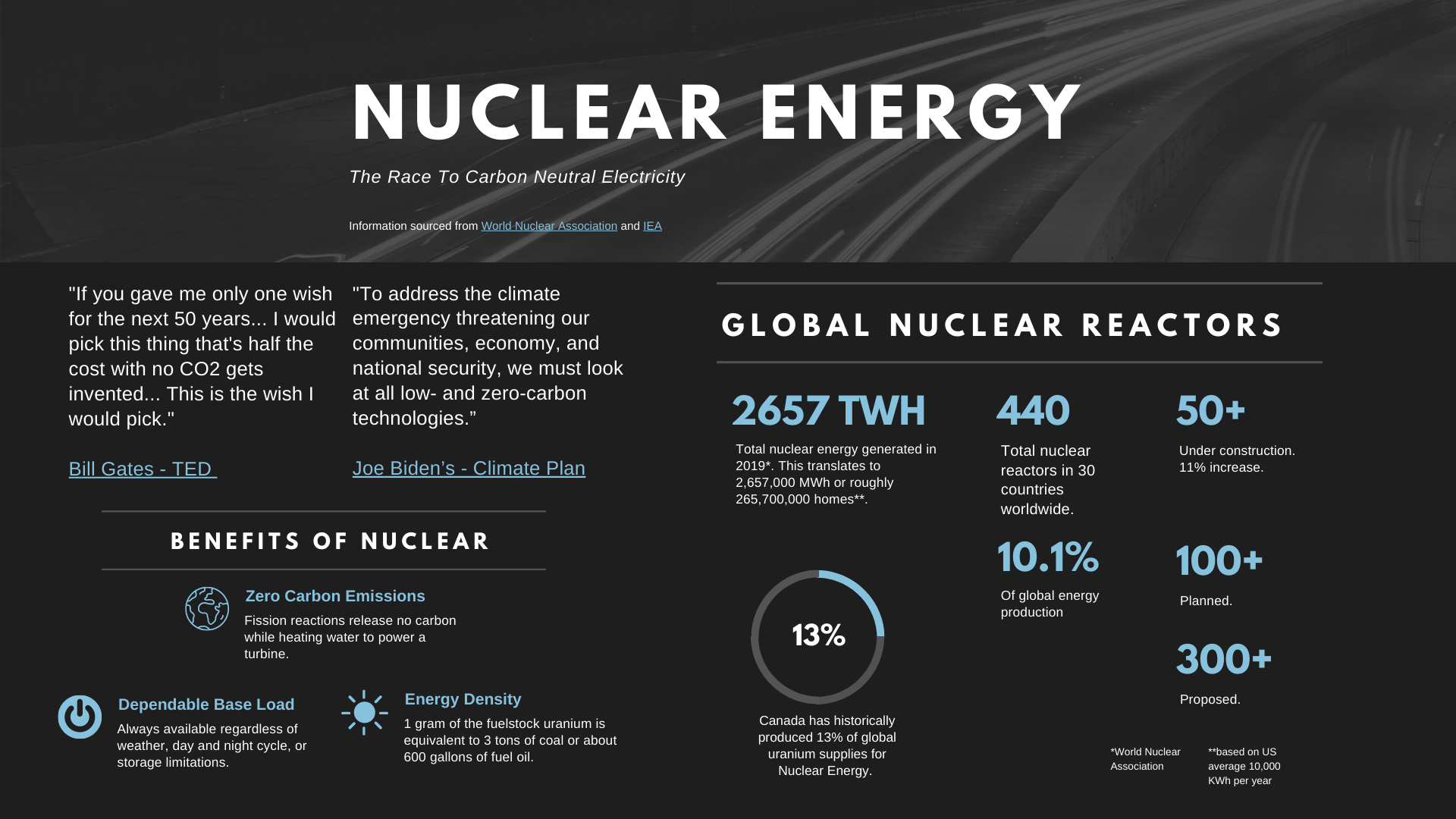 Uranium is a naturally-occurring element in the Earth's crust. Traces of it occur almost everywhere, although mining takes place in locations where it is naturally concentrated. To make nuclear fuel from the uranium ore requires first for the uranium to be extracted from the rock in which it is found, then enriched in the uranium-235 isotope, before being made into pellets that are loaded into assemblies of nuclear fuel rods. These fuel rods are then grouped together to form fuel assemblies, which make up the core of a reactor. In the reactor core the uranium-235 isotope fissions or splits, producing a lot of heat in a continuous process called a chain reaction. At a nuclear power plant, the heat from fission is used to produce steam, which spins a turbine to generate electricity. (Source: World Nuclear Association)

Nuclear power and hydropower form the backbone of low-carbon electricity generation. Together, they provide three-quarters of global low-carbon generation. Over the past 50 years, the use of nuclear power has reduced CO2 emissions by over 60 gigatonnes – nearly two years’ worth of global energy-related emissions. Global demand for electricity is set to grow 76% by 2030 and nuclear energy will play an integral role in meeting this demand.  The WNA reports that there are 442 nuclear reactors operable in over 30 countries. These reactors can generate approx. 400 gigawatts of electricity and supply approx. 10% of the world's electrical requirements. There are 54 nuclear reactors under construction in 14 countries with the principal drivers of this expansion being China (12 reactors under construction), the Middle East, Russia and India. Furthermore, the WNA reports there are a total of 439 reactors that are either order, planned or proposed. 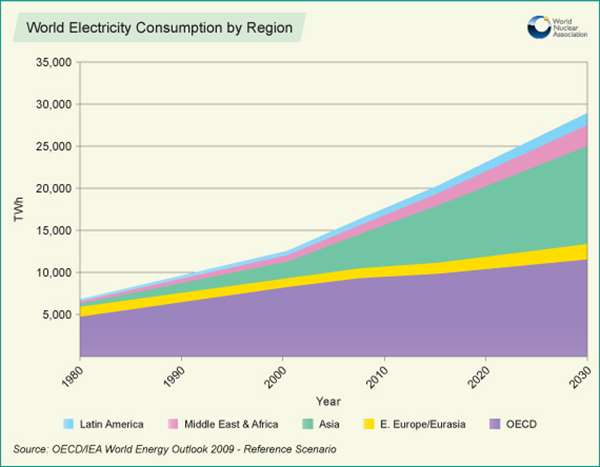 The underlying supply demand-demand fundamentals for uranium are the strongest we have seen in a long time and dictate that a uranium price increase is needed. In the last few years we’ve seen a major supply side response play out with low uranium prices forcing production/supply curtailment which has been exacerbated by the pandemic. At one point earlier in the year, almost 50% of primary mine supply was offline as the virus caused several operations to shut down temporarily. The uranium mining industry globally is reliant on supply highly concentrated both geologically and geographically and this makes the risks to the supply side far greater than the risks to the demand side.

The world’s largest producers of uranium, Kazatomprom (the world’s largest producer headquartered in Kazakhstan) and Cameco (the second largest produced headquartered in Canada), have scaled back operations and have become buyers directly in the spot uranium market to make up for this decreased production. At the current $30 per pound of U3O8 it is more profitable for them to buy in the spot market and sell into their higher priced contracts with nuclear utilities. Furthermore, much like we have seen leading up to previous uranium bull markets, there has been significant underinvestment in new mining projects which will further strain an already reduced supply side for years to come.

Shifting over to the demand side, the story has been improving, now exceeding pre-Fukushima levels, and has been outstripping primary supply over the past couple years. Finite inventories and other secondary supplies are being depleted to make up the difference. Furthermore, well over 50% of all utility uranium contracts require renewal before expiry in 2027. Utilities typically have a requirement to renew contracts 18-24 months before existing contracts expire, and therefore several utilities have recently come to the market with new RFP’s but uranium producers are unwilling to lock in long term contracts pricing their material close to the current uranium price.

Nuclear reactor demand for uranium is sticky and has been somewhat insulated to the COVID-19 pandemic versus other sources of electricity generation. It is still the only source of reliable, baseload, emissions-free electricity we have. In addition to the current 441 operating reactors globally, demand is expected to increase on the back of new reactor construction in which there are currently 54 new nuclear reactors under construction. The likelihood of massive fiscal stimulus through infrastructure spending in certain countries, including the US, could add to this number as countries try to boost their economies coming out of the pandemic.

Since 2003 we have experienced 8 periods where the uranium price has spiked significantly over a short period of time - the average uranium spot price increase was 58% over an average of only 6.6 months.  Worth noting is that the current spot price (approx. $30 per pound) is still below the average all-in cost of production (over $40 per pound) and well below the incentive price needed to bring meaningful new production online globally ($50-$60 per pound). 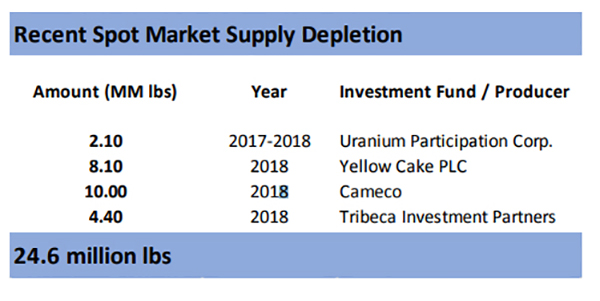 Nuclear utilities purchase uranium primarily through long-term contracts. These contracts usually provide for deliveries to begin two to four years after they are signed and provide for delivery from four to ten years thereafter. In awarding medium and long-term contracts, electric utilities consider the producer's uranium reserves, record of performance and production cost profile, in addition to the commercial terms offered. Prices are established by a number of methods, including base prices adjusted by inflation indices, reference prices (generally spot price indicators, but also long-term reference prices) and annual price negotiations. Contracts may also contain annual volume flexibility, floor prices, ceiling prices and other negotiated provisions. Under these contracts, the actual price mechanisms are usually confidential.

The long-term demand that actually enters the market is affected in a large part by utilities' uncovered requirements. Uncovered demand is projected by UxC to increase significantly over the period of 2018 to 2030. In order to address the rising portion of demand that is uncovered, utilities will have to return to the market and enter into long-term contracts. Owners and operators of U.S. civilian nuclear power reactors (civilian owner/operators, or COOs) purchased a total of 48 million pounds U3O8 equivalent (U308e) of deliveries from U.S. suppliers and foreign suppliers during 2019, at a weighted-average price of $35.59 per pound U3O8e. The 2019 total of 48 million pounds U3O8e was 20% higher than the 2018 total of 40 million pounds U3O8e. The 2019 weighted-average price of $35.59 per pound U3O8e was 8% lower than the 2018 weighted-average price of $38.81 per pound U3O8e (source: eia.gov). This illustrates the increased demand we are seeing that will ultimately result in a higher spot price.

The uranium (U3O8) deposits of Saskatchewan, Canada are the richest in the world. The Athabasca Basin is an ancient sedimentary basin which hosts the world's most significant uranium mines and produces almost 20% of the current world uranium production in a safe and favourable jurisdiction. Athabasca uranium deposits also have grades substantially higher than the world average grade of under 0.2% U3O8. 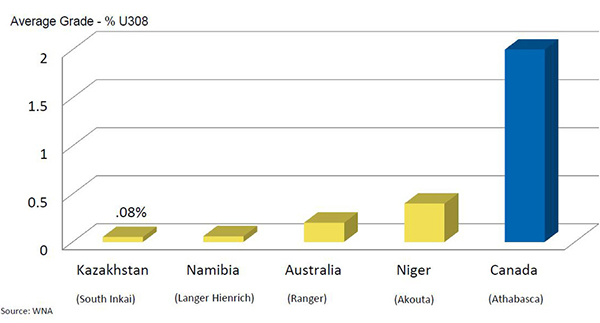 Why The Athabasca Basin?

The Athabasca Basin is home to the world’s largest and highest grade uranium mining and milling operations – including the McArthur River and Cigar Lake uranium mines, as well as the Key Lake and McClean Lake uranium mills. Saskatchewan is also consistently ranked as a top mining jurisdiction to work in globally by the Fraser Institute. Skyharbour holds an extensive portfolio of uranium and thorium exploration projects in The Basin and is well positioned to benefit from improving uranium market fundamentals with six drill-ready projects. Skyharbour has acquired from Denison Mines, a large strategic shareholder of the Company, a 100% interest in the Moore Uranium Project which is located 15 kilometres east of Denison's Wheeler River project and 39 kilometres south of Cameco's McArthur River uranium mine.