The Moore Uranium Project consists of 12 contiguous claims totaling 35,705 hectares located 42 kilometres northeast of the Key Lake mill, approx. 15 kilometres east of Denison’s Wheeler River project, and 39 kilometres south of Cameco’s McArthur River mine. Unconformity-hosted uranium mineralization was discovered on the property at the Maverick Zone in the early 2000’s and several high grade intercepts have been drilled since. Drill hole ML-61 contained the best historical result drilled on the property to date, which returned 4.03% eU3O8 over 10 metres, including 20% eU3O8 over 1.4 metres, starting at a depth of 265 metres. Drill holes ML-55 and ML-47 also encountered high-grade mineralization, returning 5.14% U3O8 over 6.2 metres, and 4.01% U3O8 over 4.7 metres, respectively. The depth to the unconformity on the property is relatively shallow, with the thickness of the sandstone cover varying from less than 125 metres on the property's eastern side to over 325 metres on the property's northwestern side. Basement rocks are predominantly paragneisses belonging to the Wollaston Domain. A large mafic sill known as the “Moore Lake complex” partially overlies a portion of the eastern side of the property. The property has been the subject of extensive historical exploration with over $40 million in expenditures, and over 140,000 metres of diamond drilling completed in over 380 drill holes. The project is accessible via ice roads from the McArthur River mine haul road and float or ski equipped aircraft. 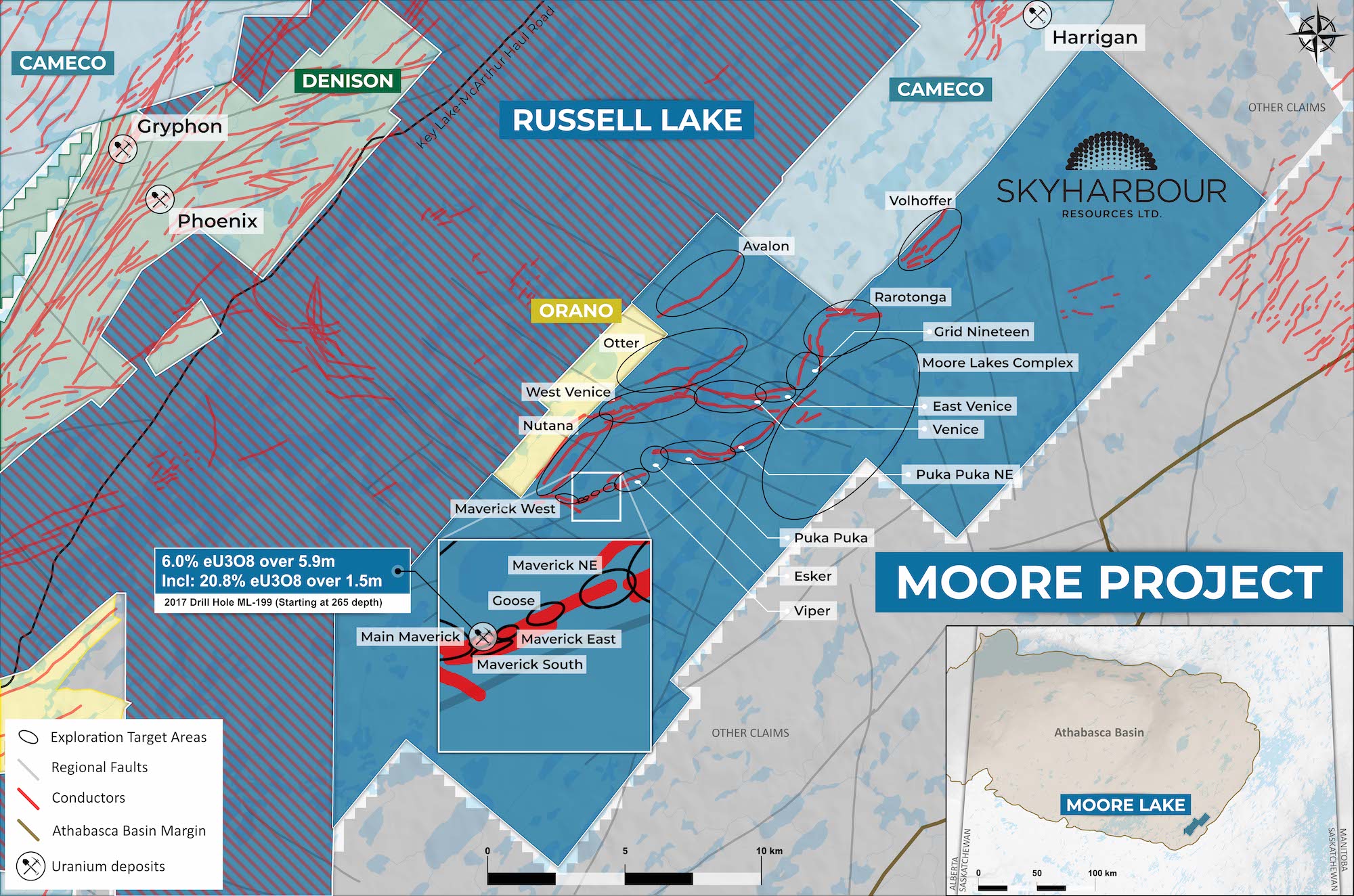 Since 1969, the property has undergone episodic exploration by several companies including Noranda, AGIP, BRINEX, Cogema, Kennecott/JNR Resources and IUC/Denison. In April of 2000 the Maverick Zone was discovered and in the fall of 2003, International Uranium Corporation, who then merged with Denison, optioned 75% of the property from JNR and took over operatorship. Subsequently Denison acquired the remaining 25% interest from JNR for an undivided 100% in February of 2013, when it acquired all of the outstanding shares of JNR. Skyharbour's head geologist and director Rick Kusmirski was the President and CEO of JNR Resources during that time. Exploration programs carried out on the project lands include an assortment of airborne and ground electromagnetic and magnetic surveys, ground gravity, seismic, IP/resisitivity and geochemical surveys, mapping, prospecting, lake sediment sampling programs and the drilling of more than 370 diamond drill holes. From mid-2000 onwards, the primary focus of exploration has been the 3.5 kilometre long Maverick structural corridor where pods of high grade unconformity-type uranium mineralization have been intersected. The best intercepts to date were obtained from drill holes testing the southwestern portion of this corridor. The potential of intersecting additional mineralization along this corridor is very good and as such it will continue to be a high priority target area. Also of note is that both basement and unconformity-type uranium mineralization have been intersected in a number of underexplored target areas on the property. 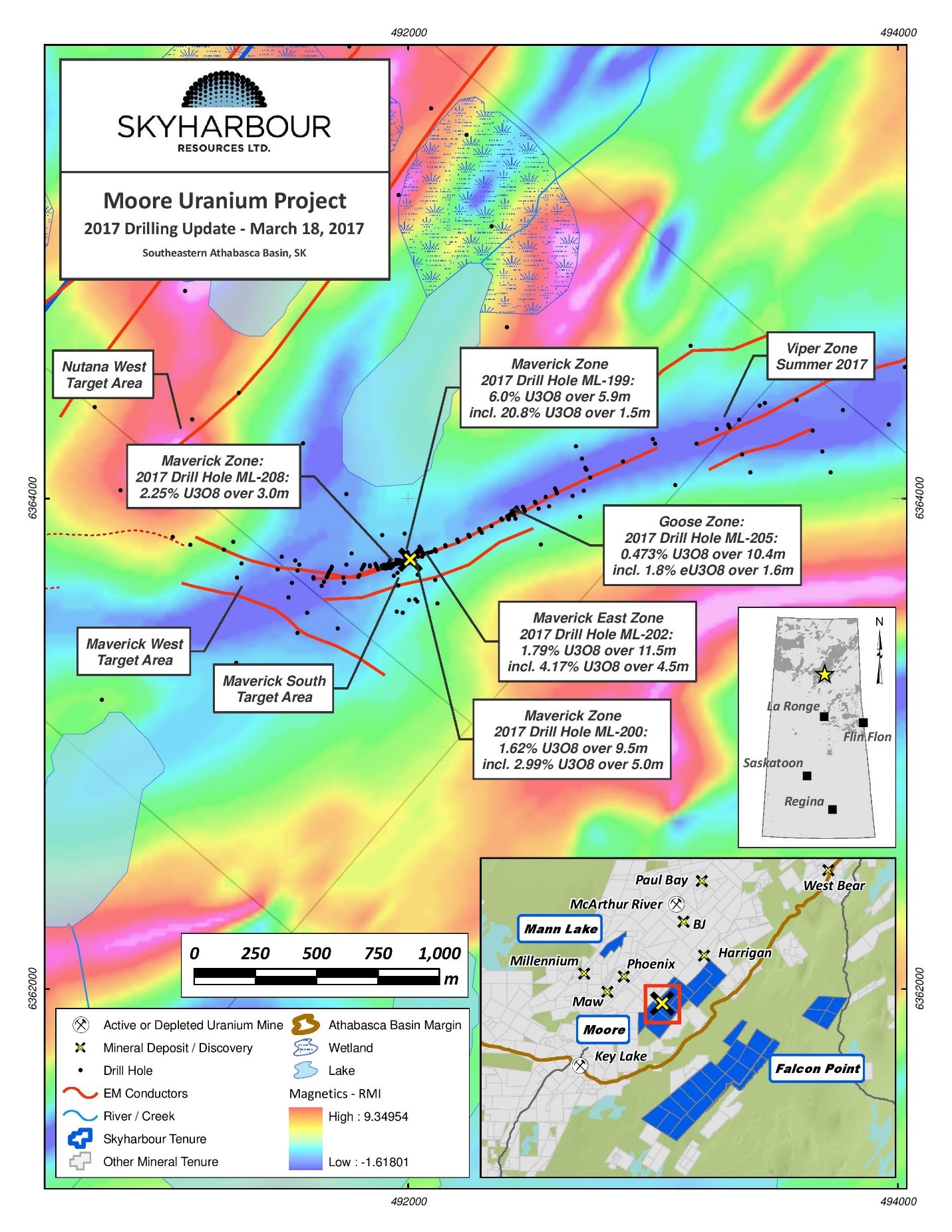 In addition to the Maverick Zone, diamond drilling in several other geophysical target areas, has intersected multiple conductors associated with significant structural disruption, strong alteration and anomalous uranium and pathfinder element concentrations. This bodes well for the possibility of discovering additional high grade uranium zones in these areas. 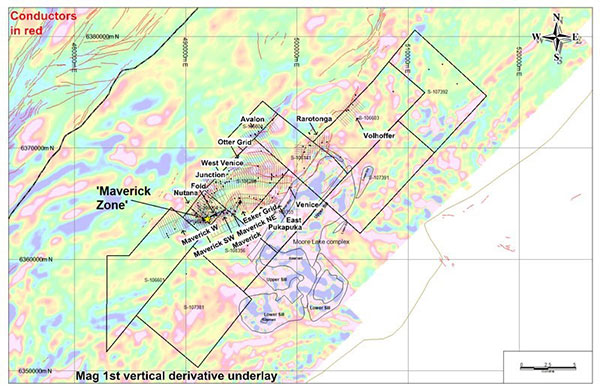 Skyharbour’s Head Technical Advisor and Director, Rick Kusmirski commented: “I’ve always considered the Moore Uranium Project to be one of the most geologically prospective exploration projects in the Basin, with the potential to host a sizeable high grade uranium deposit. JNR made the initial high grade discovery at the Maverick Zone and after a number of years we sold the project and company to Denison. I am very excited to get back to work on this project with the Skyharbour team. In addition to the Maverick structural corridor, which still has a number of targets that are untested and require follow-up, there are at least nine other target areas throughout the property that contain well defined and extensive conductive systems. The nominal amount of drilling that was carried out in these areas intersected well defined structures associated with multiple graphitic lithologies. Analysis of the drill core returned highly anomalous geochemistry, including uranium mineralization in seven of the target areas.” 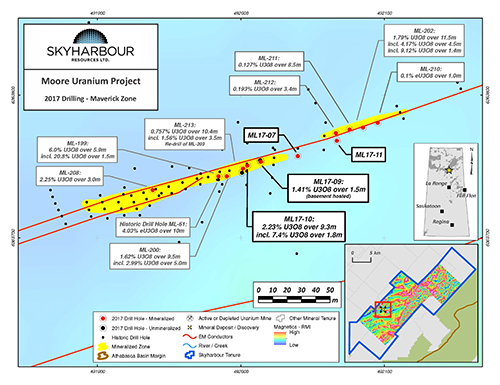 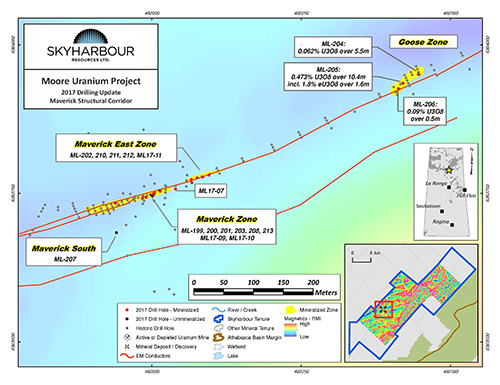 Drill hole ML-207 was drilled to a depth of 468 metres in the Maverick South Zone to test for deeper basement hosted mineralization. As one of the few exploratory holes drilled to test the basement potential at the Moore Project, this hole intersected anomalous uranium mineralization with coincident boron enrichment several metres beneath the unconformity. This is highly encouraging and demonstrates the strong discovery potential at depth in the underlying basement rocks throughout the Moore Project.

Also of note, hole ML-205 was drilled in a separate high grade mineralized lens known as the Goose Zone located approx. 500 metres E-NE of the Main Maverick Zone and returned 1.80% U3O8 over 1.6 metres within 0.47% U3O8 over 10.4 metres from 275.1 to 285.5 metres downhole. The Goose Zone is still open along strike and at depth in the basement rock. Further along strike one kilometre to the E-NE (approx. 1.5 kilometres from the Main Maverick Zone), the Viper Zone represents a high priority target going forward with limited historical drilling having discovered shallow uranium mineralization.

Only 2 kilometres of the total 4 kilometre long Maverick corridor has been systematically drill tested leaving strong discovery potential along strike as well as at depth in the underlying basement rocks which have seen limited drill testing historically. Furthermore, there are ten other regional drill targets on the Moore Project in which historical drilling has discovered uranium mineralization including the Pukapuka, Nutana, Otter Grid, Avalon, Venice and Rarotonga Zones. All of these zones remain open along strike and at depth with only limited and widely spaced exploratory drill testing having been conducted historically.

The completed winter/spring diamond drilling program totaled 3,399 metres in 9 holes which were drilled to a depth of between 330 and 525 metres. Five of the nine holes were drilled on regional grids testing geophysical targets and as a follow up to previous drilling, while the remaining four holes were drilled on the high grade Maverick structural corridor. 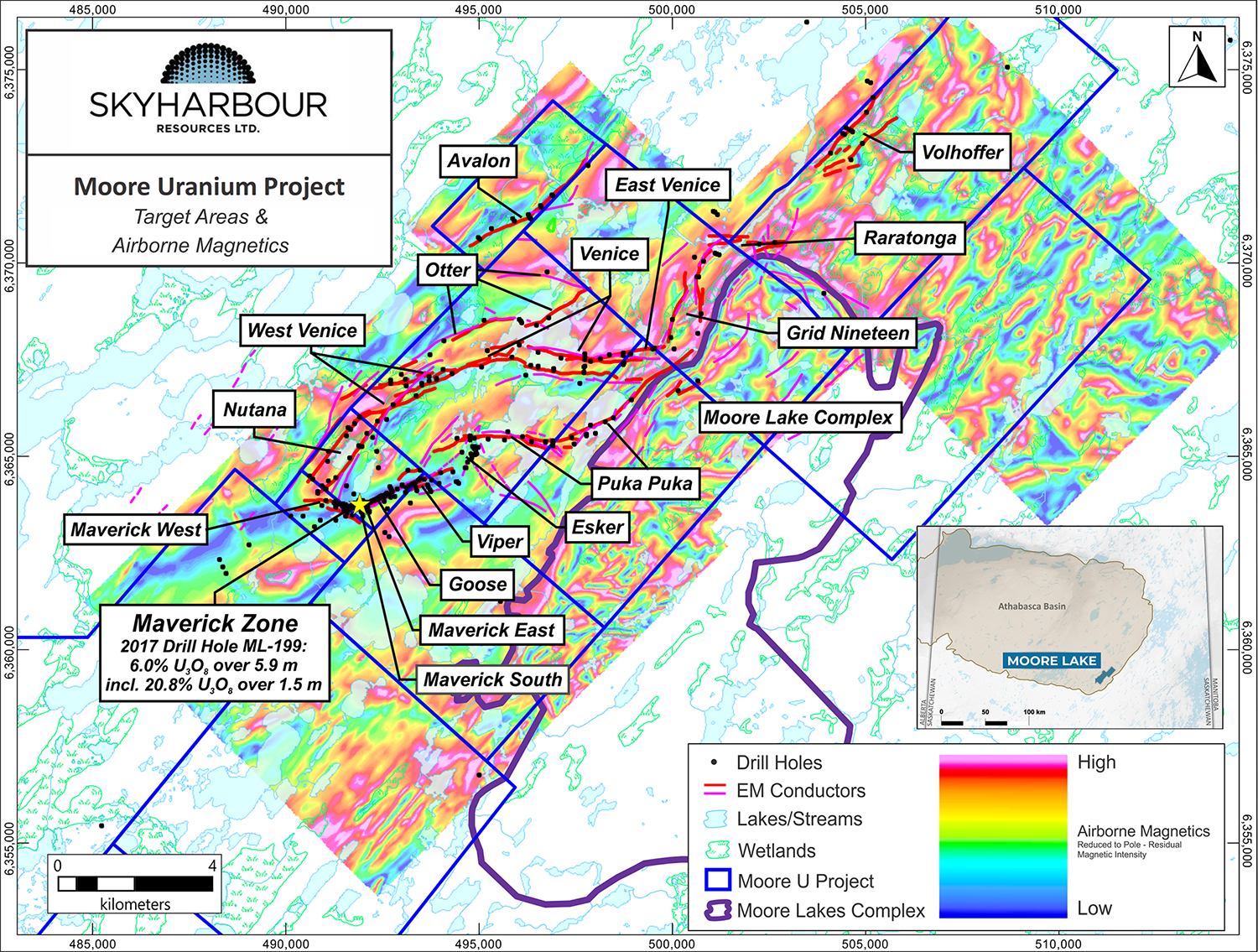 Drilling at the Maverick Corridor and the Venice Zone: 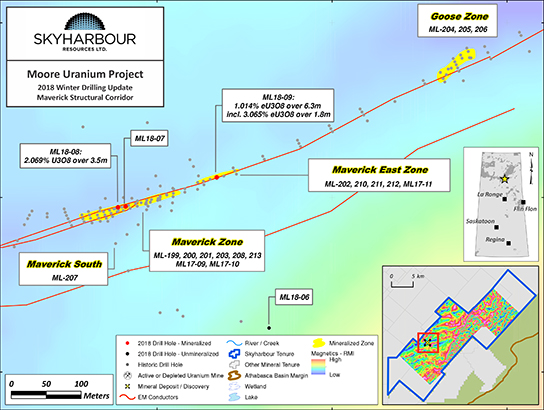 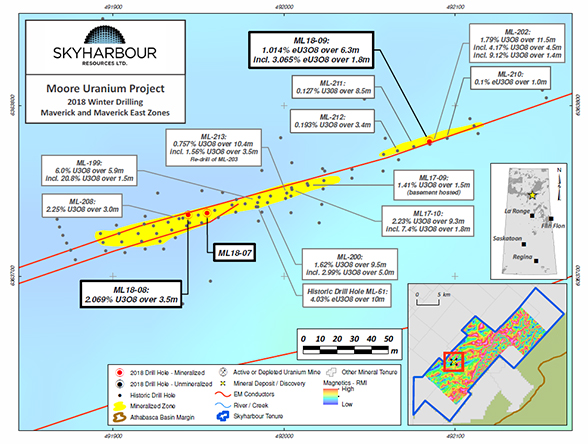 The most encouraging results from the drilling on the regional grids were obtained from ML18-03 which tested targets on the Venice grid. This hole intersected a strongly altered and structurally disrupted basal sandstone column and basement rocks. This hole returned anomalous pathfinder elements as well as a 0.5 metre interval containing 0.154% U3O8 in graphitic pelites just below the unconformity in the basement rock. The Venice target is a high-priority regional target going forward given this recent discovery. 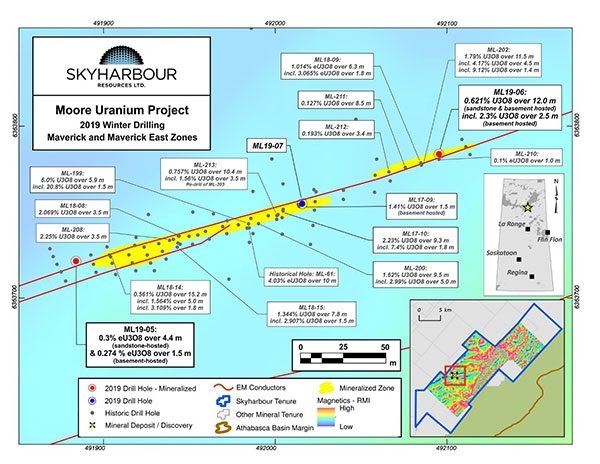 Drill hole ML19-06 was drilled at the eastern end of the Maverick East Zone and returned 0.62% U3O8 over 12.0 metres from 273.0 metres to 285.0 metres downhole including 2.31% U3O8 over 2.5 metres. The highest grade portion of this mineralized intercept is hosted in clay altered granitic assemblages within the basement rock, along with evidence for atypical structural disruption at the unconformity. This combination of lithologic and structural controls illustrate the potential for significant down-dip mineralized structures in the zone. 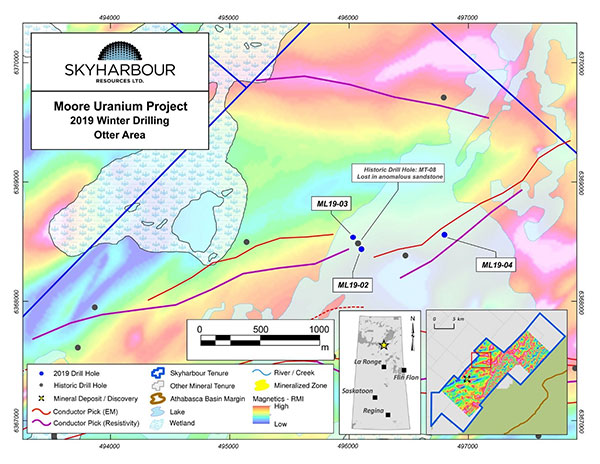 Exploratory drill hole ML19-04 drilled in the newly discovered Otter Zone area intersected prospective intrusive and graphitic lithologies in the basement rocks accompanied by uranium values up to 0.15% U3O8 over 0.5 metres and anomalous B, Th, Ni, Cu and Mo. Holes ML19-02 and ML19-03 at the Otter Zone intersected similar lithologic packages with ML19-02 intersecting highly clay altered and tourmalinized pegmatites containing up to 1.26% boron, indicative of a high level of prospectivity for additional uranium mineralization to be discovered. Analysis of the regional geophysical and geological data from the Otter Zone area indicate that it is part of a complex series of graphitic metasedimentary packages folded around and within Hudsonian granitic assemblages.

The Company carried out 2,500 metres of drilling to follow up on the success of the drill programs completed in the 2019 season. This program tested both unconformity and basement-hosted targets along the high grade Maverick structural corridor.

Drill hole ML20-04 doubled the known strike extent of the Maverick East Zone by intersecting a discrete basement-hosted zone of uranium mineralization from 273.9 metres to 278.4 metres downhole. The interval returned 4.5 metres of 0.38% U3O8 with a basal high grade basement intercept returning 0.5 metres of 1.43% U3O8. Additional drilling in the Maverick East confirmed the continuity and structural control of the zone both internally and peripherally. A greater understanding of the Maverick Structural Corridor was also obtained by additional drilling in the Viper and Maverick NE target areas.

The Company is currently carrying out 2,500 metres of drilling in seven to nine diamond drill holes to follow up on the recent success of the Winter drill program completed earlier this year. This drill program will test both unconformity and basement-hosted targets along the high-grade Maverick Structural Corridor. Of particular interest are potential underlying basement feeder zones to the unconformity-hosted high-grade uranium present along the Maverick corridor.