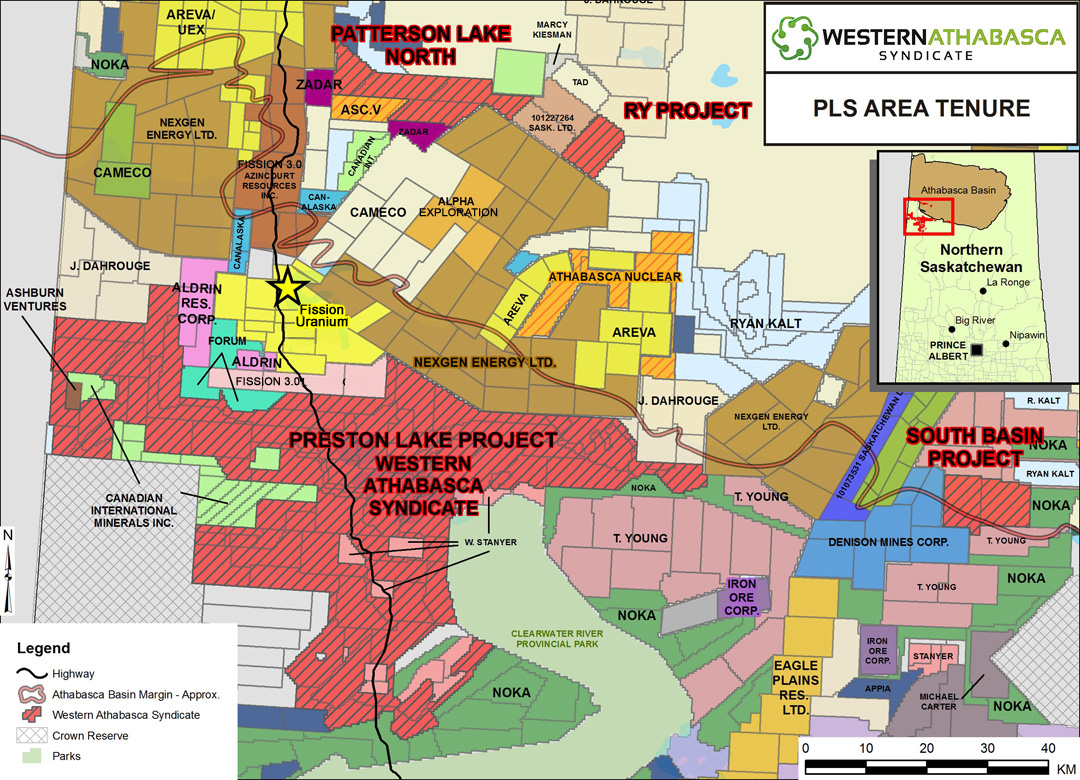 The 2013 summer exploration program was completed in mid-October and consisted of rock, soil, radon, and biogeochemical sampling in addition to airborne electromagnetic, magnetic, and radiometric surveys. Final results from the last phase of the program are pending and will help to both refine known targets and identify additional areas of interest.

Thus far, integration of the geochemical data received with the airborne geophysics and historic data has successfully delineated more than fifteen high priority areas associated with eight highly prospective exploration corridors. The Property’s prospective corridors are very similar to the corridor hosting the high-grade PLS discovery by Alpha Minerals Inc. and Fission  Uranium Corp. (see link below). Management cautions, mineralization present on proximal properties (or ‘corridors’) is not necessarily indicative of mineralization on the Syndicate’s Property. A high potential exploration corridor may be defined as prospective, parallel trends of conductors, magnetics lows, and interpreted structures. These corridors remain largely underexplored south of the Basin, having been ignored historically. However, the Syndicate’s 2013 airborne geophysical data has confirmed that at least eight high potential corridors extend onto the Preston Lake Property. Moreover, integration of the 2013 summer ground sampling data further enhances the corridor potential with multiple geochemical anomalies coincident.

Of the fifteen areas associated with the corridors, the most prospective will be assessed by grid based radon, and ground gravity and EM surveys expected to commence in December and extend through February. This data will be used for final targeting in advance of drilling anticipated to commence in March 2014. Permitting of these programs including drilling is currently underway.

Jordan Trimble, President and CEO of Skyharbour Resources, states: “As we wait for the final results from the summer program to come in, we are very pleased with the success of the field work thus far at Preston Lake. To date, eight prospective exploration corridors, similar to the conductive corridor at PLS, have been identified with many coincident geochemical anomalies throughout them. The encouraging findings early in the program are helping to advance the property towards a drill-ready state ahead of our initial expectations and timelines.”

The Athabasca Basin of Saskatchewan hosts the world’s largest and richest high-grade uranium deposits which have grades substantially higher than the world average grade of about 0.1% U3O8. The Patterson Lake area has received escalating exploration attention and claim acquisition activity as a result of the new, near surface discoveries made by Alpha and Fission which includes the recently reported drill interval of 9.08% U3O8 over 54.5 metres in drill hole PLS13-075. Consistent high-grade, near surface U3O8 assays from Alpha and Fission demonstrate the potential for high-grade uranium mineralization on the geologically prospective yet underexplored margins of the western side of the Athabasca Basin.

Athabasca Nuclear President and CEO, Charles C. (Chuck) Downie, P.Geo., is the Qualified Person as defined by National Instrument 43-101 and has approved the technical information in this release.

Skyharbour has entered into a Consulting Agreement (the "Agreement") with Vancouver based Transcend Resource Group (“Transcend”), who provides investor relations and related corporate communications services to public companies in Canada. Transcend will help raise investor awareness of Skyharbour by increasing its visibility in the financial marketplace, attracting investment to the Company, and expanding coverage within financial networks. The Agreement has an initial term of two months until December 31, 2013. In consideration for the provision of the services to be provided, Transcend will be paid $3,000 per month, plus applicable taxes by Skyharbour. The Agreement is subject to acceptance of the TSX Venture Exchange.

Skyharbour Resources Ltd. is a uranium exploration company and a member of the Western Athabasca Syndicate which controls a large, geologically prospective land package consisting of five properties (287,130 hectares or 709,513 acres) in the Athabasca Basin of Saskatchewan. $6,000,000 in combined exploration expenditures over the next two years is planned on these properties, $5,000,000 of which is being funded by the three partner companies. Skyharbour also maintains a diverse portfolio of precious and base metal projects in the Red Lake district of Ontario. The Company is well funded with over $1 million in the treasury and has 43.6 million shares outstanding with insiders owning over 25% of the outstanding shares. Skyharbour’s goal is to increase shareholder value through new discoveries and developing exploration projects in geopolitically favourable jurisdictions.