Vancouver, BC - Skyharbour Resources Ltd. (TSX-V: SYH)  (OTCQB: SYHBF) (Frankfurt: SC1P) (the “Company”) is pleased to announce that partner company Valor Resources Limited (“Valor”) has provided an update on results from the recently completed on-ground field program at the Hook Lake Project. A total of 57 samples were taken from across the Hook Lake Project with assay results now having been received. The results are highlighted by the assays from the Hook Lake (or Zone S) prospect which confirmed the reported historical high-grade uranium mineralization. A total of seven rock chip samples were taken from a historical trench located at the Hook Lake prospect, with four of these samples returning high-grade uranium assays (>6% U3O8) as well as highly elevated rare earth (>0.5% TREO*), silver (>50ppm) and lead (> 1.8%) assays. The samples are selective in nature with a high potential for bias and should not be considered as being representative of the overall mineralised structure or zone.

The Hook Lake Project consists of 16 contiguous mining claims covering 25,846 hectares, located 60 km east of the Key Lake Uranium Mine in northern Saskatchewan. Skyharbour signed a Definitive Agreement with Valor Resources on the Hook Lake Uranium Project whereby Valor can earn-in 80% of the project through $3,500,000 in total exploration expenditures, $475,000 in total cash payments over three years and an initial share issuance of 233,333,333 shares of Valor. 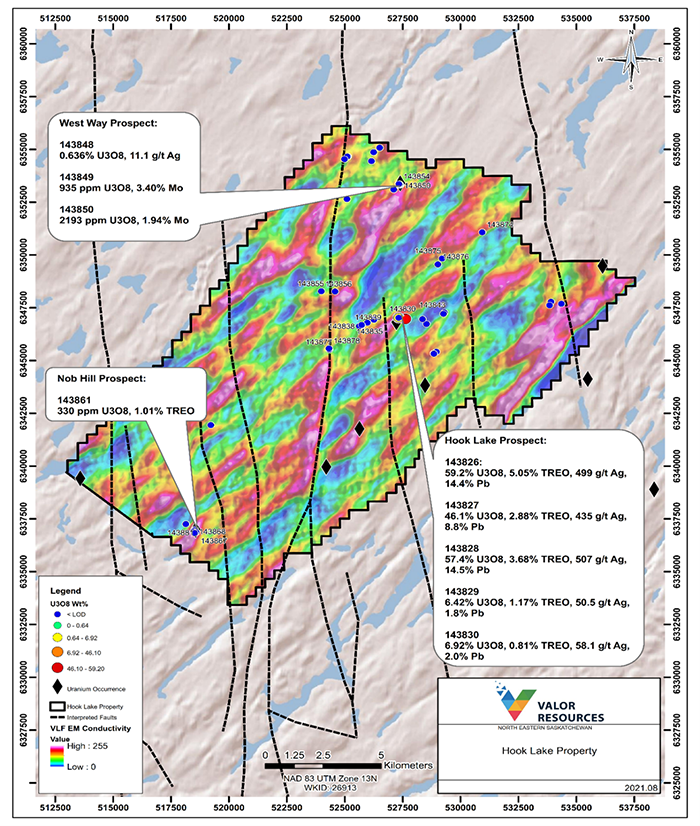 The program was conducted by Dahrouge Geological Consulting Limited, and focused on validating and developing the geological understanding of the historic uranium occurrences, such as the Hook Lake (or Zone S) and West Way prospects. The fieldwork was also designed to follow-up on the new targets generated from the magnetic/VLF-EM survey completed in April and the priority anomalies identified from the detailed airborne radiometric survey completed in July.

A total of seven rock chip samples were taken from a historical trench located at the Hook Lake prospect, with four of these samples returning high-grade uranium assays (>6% U3O8) as well as highly elevated rare earths (>0.5% TREO), silver (>50ppm) and lead (>1.8%) assays. These samples were taken from in-situ uraninite mineralization within a biotite or psammitic gneiss. A boulder sample located approximately 300m east of the Hook Lake trench also returned high-grade uranium and rare earths with 59.2% U3O8 and 5.05% TREO.

The Hook Lake high-grade uranium (and rare earth) mineralization is interpreted to be located at a dilational trap/jog which has formed at the intersection of a northeast-southwest trending shear zone and a possible north-south trending structure (potentially a reactivated Tabbernor fault structure). This interpretation highlights the potential significance of the north-south trending Tabbernor fault system structures, several of which are interpreted to transect the project area. Besides the down-dip/down-plunge potential of the immediate Hook Lake target, there is potential for further structural targets of this nature along strike to the northeast and southwest from the Hook Lake prospect. This will be further investigated during on-ground follow-up work programs.

At the West Way prospect, located approximately 6.5km north of the Hook Lake prospect, five grab samples of outcrop or subcrop were taken with three of the samples returning anomalous uranium assay results including 0.64% U3O8 from a quartz vein. Two of these three samples returned high-grade molybdenum with assays of 3.4% and 1.9% Mo.

The controls on mineralization at West Way are currently uncertain and more field work is required to improve the geological understanding and develop drill targets. However, the airborne magnetics suggest a spatial association with a N-S structural feature, and there are potential repeats of this structural setting along strike to the northeast and southwest of West Way. This will be further investigated during on-ground follow-up work programs, in addition to following-up on the elevated Mo assays.

Another 44 samples were taken from across the project area, including 9 samples from the Nob Hill prospect. Results from Nob Hill ranged from no meaningful mineralization to one grab sample of pegmatite that returned an assay of 280ppm U and 1.01% TREO.

Valor has the right to earn an 80% working interest in the Hook Lake Uranium Project located 60 km east of the Key Lake Uranium Mine in northern Saskatchewan. Covering 25,846 hectares, the 16 contiguous mineral claims host several prospective areas of uranium mineralization including:

The project area is in close proximity to two all-weather northern highways and grid power. Historical exploration has consisted of airborne and ground geophysics, multi-phased diamond drill campaigns, detailed geochemical sampling and surveys, and ground-based prospecting culminating in an extensive geological database for the project area.

The technical information in this news release has been prepared in accordance with the Canadian regulatory requirements set out in National Instrument 43-101 and reviewed and approved by Richard Kusmirski, P.Geo., M.Sc., Skyharbour’s Head Technical Advisor and a Director, as well as a Qualified Person.

Skyharbour holds an extensive portfolio of uranium exploration projects in Canada's Athabasca Basin and is well positioned to benefit from improving uranium market fundamentals with six drill-ready projects covering over 240,000 hectares of land. Skyharbour has acquired from Denison Mines, a large strategic shareholder of the Company, a 100% interest in the Moore Uranium Project which is located 15 kilometres east of Denison's Wheeler River project and 39 kilometres south of Cameco's McArthur River uranium mine. Moore is an advanced stage uranium exploration property with high-grade uranium mineralization at the Maverick Zone that returned drill results of up to 6.0% U3O8 over 5.9 metres including 20.8% U3O8 over 1.5 metres at a vertical depth of 265 metres. The Company is actively advancing the project through drill programs.

The Company also owns a 100% interest in the South Falcon Uranium Project on the eastern perimeter of the Basin, which contains a NI 43-101 inferred resource totaling 7.0 million pounds of U3O8 at 0.03% and 5.3 million pounds of ThO2 at 0.023%. Skyharbour has signed a Definitive Agreement with ASX-listed Valor Resources on the Hook Lake (previously North Falcon Point) Uranium Project whereby Valor can earn-in 80% of the project through $3,500,000 in total exploration expenditures, $475,000 in total cash payments over three years and an initial share issuance.