South Bay Mine Project PowerPoint - May 2008

Skyharbour Resources holds a 100% interest in the approximately 1,780 acres of land around the past-producing Selco South Bay copper-zinc-silver mine.  The South Bay property is located in the Dent, Mitchell, and Agnew Townships, 80 kilometres east-northeast of Red Lake in northwestern Ontario. 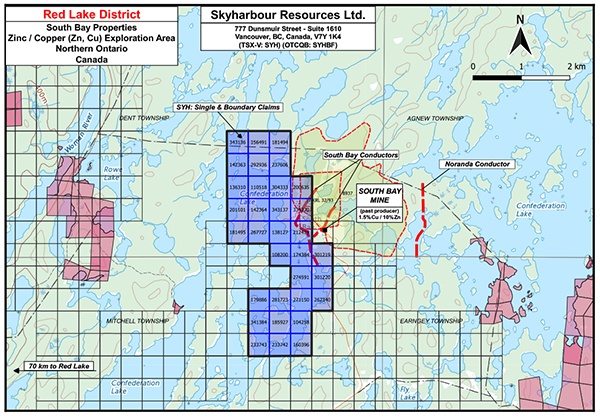 The former South Bay Mine produced approximately 1.6 million tons of 2.3% copper, 14.5% zinc, and 3.5 oz/ton silver to a vertical depth of 410 metres, and explored to a vertical depth of 600 metres, between 1970 and 1982. The South Bay deposit is a classic Archean Volcanic associated Massive Sulfide (VMS) deposit that is hosted in an area known as the Confederation Belt.

Skyharbour Resources believes that with current geophysical survey methods allowing exploration to depths in excess of 1,000 metres, there is significant potential to identify new, highly prospective precious and base metal settings on the South Bay property.

Skyharbour completed a Quantec "Titan-24" geophysical survey over the its South Bay property in Feb. 2007. A total of 22 line kilometres were surveyed. The primary objective of the "Titan-24" survey was to identify Direct Current, Induced Polarization (DCIP) and Magnetotelluric (MT) anomalies, which may represent copper-zinc Volcanic Massive Sulfide (VMS) mineralization similar to the South Bay copper-zinc-silver deposit. The "Titan-24" survey responses over the South Bay Mine deposit were used as a "Calibration Model" for prioritizing anomalies in the area..... 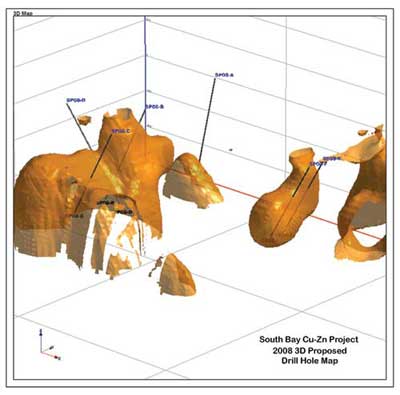 Three dimensional modeling of the geophysical responses and known diamond drilling show that most of the targets have not been tested at all or were very poor tests of the Titan 24 anomalies.

On April 3rd, 2008 Skyharbour announced it made what appeared to be a significant discovery of volcanogenic massive sulphide (VMS) mineralization, in an area that has never been drill tested in the past, approximately 500 metres to the southwest of the former South Bay Mine shaft. 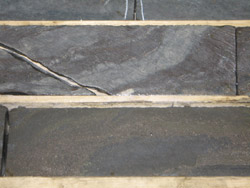 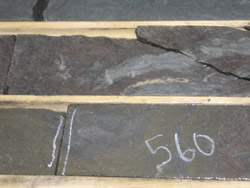 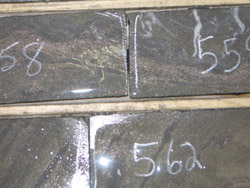 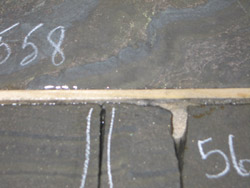 The discovery of VMS style zinc mineralization in a totally unexplored portion of the South Bay stratigraphy is highly significant. It is too early in the exploration process to have identified the principle vent(s) and more strongly mineralized areas. Subsequent pressure and folding of the mineralization has resulted in thinning and thickening of the sulphides and buried to depth with concentrations expected to be both of lower and higher grade. Concentrations most likely will be found in both pods and lenses with lower and higher grade sections. The possibility of parallel zones is also a potential. Exploration is currently focused on expanding the area of mineralization to identify richer portions of the system.

The stratigraphy hosting the discovery is a thick sequence of rhyolitic flows and flow breccias intruded by numerous porphyry bodies and sills. The mineralization may be within stratigraphy correlative with that hosting the South Bay mine. The area of the Skyharbour discovery is marked by a large and discrete sodium depletion zone in rocks that typically characterize VMS deposits.

The dominant mineral in the discovery is sphalerite (zinc) with minor chalcopyrite (copper). The zone is distinctly exhalite in origin and is very fine grained with very fine bedding and some chert beds. These features suggest the mineralization is on the apron, some distance (+/- 200 metres) from a potential vent area where zinc and copper grades are generally much higher. The deposit overlies an extensive rhyolitic flow breccia sequence with chlorite alteration in the matrix to the fragments.

The general area of the discovery has all the characteristics of a base metal camp. Typically a camp hosts a number of zinc-copper deposits with one or two larger deposits of 15 to 50 million tonnes and a range of much smaller deposits down to 0.5 million tonnes. The only significant deposit found to date is the South Bay Mine deposit and it is at the smaller end of the scale. This might suggest that larger deposits remain to be discovered.

The former South Bay Mine, located on the Company's 123498 claim block, produced approximately 1.6 million tons of 2.3% copper, 14.5% zinc, and 3.5 oz/ton silver to a vertical depth of 410 metres, and explored to a vertical depth of 600 metres, between 1970 and 1982.   The South Bay deposit is a classic Archean Volcanic associated Massive Sulfide (VMS) deposit that is hosted in an area known as the Confederation Belt. 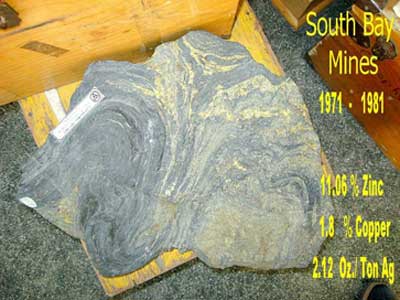 The South Bay deposit lies within a coalescing series of rhyolite domes and exhibits a small but distinct alteration zone in the footwall. Large scale litho geochemical sampling indicates the known deposit is related to a large zone of sodium depletion that terminates against a more mafic rock sequence in the hanging wall of the rhyolite dome complex. This setting is deemed exceptionally favorable and has not been systematically explored. Several surface geophysical targets and off-hole responses generated from down hole pulse electromagnetic surveys have yet to be tested.

Although the South Bay Mine was discovered at shallow depth, the best ore was subsequently identified at depths below 275 metres illustrating the concept of near-surface mineralization reflecting deeper-lying deposits. Many near surface zones have been identified but only South Bay has developed into a mine emphasizing the need to look deeper into the belt. A new, deeper penetration geophysical technique known as the "Titan-24" developed by Quantec Geoscience Inc. is being untilized by Skyharbour Resources.

VMS deposits are found within the massive or semi-massive sulphide accumulations typically formed above submarine volcanic centres, which are preserved as highly altered stockwork zones (and can themselves host ore-grade mineralization in sulphide-rich veins). While pyrite is ubiquitous and forms the bulk of the massive sulphide body, metal zoning of ore minerals can be seen with copper, in chalcopyrite form, typically giving way outwards to the more soluble sphalerite and galena and sometimes barite (barium sulphate). The outermost flanks will typically be more oxidized containing maganesse, hematite, chert and finally magnetite. In some cases at greater distance this lateral gradation culminates in iron or maganesse-rich massive oxide deposits, for example the Archean Algoma-type Banded Iron Formations, which can have great economic significance in their own right.

Due to the relatively small extent and therefore tonnage (0.1-10 Mt), major VMS copper-zinc mining camps usually correspond with deposit clusters. However, despite their small size, the high grade and bulk nature of these deposits mean they are often economically profitable to mine. Furthermore, exploration using geophysical techniques is aided by the high relative density and electro-magnetic properties of these bodies.